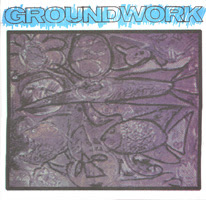 Here's the only 7" of Groundwork from Connecticut, which was released on Round Two Records in 1992. So not the (awesome, and more well-known) Groundwork from Arizona, but another one, that was around at the same time, the early '90s. This Groundwork had a more melodic and rocking sound than the AZ Groundwork and was not nearly as political. This 7" is still a great listen, even if I prefer the AZ Groundwork. Unfortunately there are only 2 songs on this 7" tho which is a bit short. Their full discography includes several demo's, a CT hardcore compilation 7" (also on Round Two Records) and a CD with a couple of their recordings. I have the compilation 7" which I posted here will post at some point, I do not have any of the other recordings unfortunately. I would love to get my hands on them, so if anybody can help, please hook me up! For now, enjoy this 7".

Thanx buddy i love this 7".Too short though. They are also on a split 7" with another Ct. band Evolve.

I just posted over on the Betrayed post (Steve). I hang out with the singer from the CT Groundwork all the time now in Colorado. You have all the obscure shit posted on here!

Any chance of a re up on this as well, thanks man!

Groundwork had only one demo, appeared on the Round 2 Records comp, a 7" on Round 2 and a Discography on Seize Records. All tracks were rerecorded @WGNS Studios, 1100 pressed, CD only! You might find a copy floating around at
http://www.discogs.com/seller/Redscroll?style=Hardcore. If its not listed in his inventory, click the ask the seller option.

Please re up! Thanx

please re up thanks