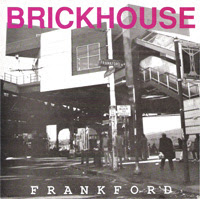 Brickhouse was a shortlived hardcore band from Philadelphia, PA. They were formed in 1989, and besides a demo and the 'Frankford' 7" which was released on Street Level Records in 1991 I don't think the band did anything else. I don't even know of a compilation that they were on? The 7" was named after a neighborhood of Philly called Frankford, which was the home of some of the band members. The band had some members of Pagan Babies and The Uprise and 2 singers (with similar voices), as you can see in the video below. If anybody has any more info on them or can share the demo, do leave a comment please, cuz this band rocks hard. Solid hardcore, especially 'Nowhere But Up' is a killer track, altho all 4 tracks are great. They're not trying to do anything new, but what they do they do well. Enjoy!

My apologies for the weird skip right at the start of 'No More Favors', can't seem to get rid of it. I also scanned in a Street Level Records flyer that came with my copy of the 7". Again, only XL t-shirts & long sleeves.

Here's a cool live video of Brickhouse in action:

Another solid post for a band I had never heard of. Their bassist is awesome, too.

Thanks for this, I have no idea what happened to my copy.
Dan, the guitar player, is now in the Heels (along with singer Mike from the Pagan Babies). Search "Heels Brickhouse" for a clip from a great show this year, with a partial Brickhouse reunion on "No More Favors."