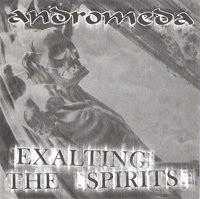 A quick post, and my final one for 2010. Another request, this time for Andromeda's 'Exalting The Spirits' MCD. Check my first post on Andromeda here if you don't know this band already. This MCD was released on Genet Records out of Belgium in 1998, almost simultaneously with a split 7" with Pray Silent from Switzerland. It features 3 new songs and the 3 songs from the 7". In the insert the recording data for the 7" songs is the same as those mentioned in the insert for the 7" itself, however there are some noticeable differences, especially in 'Burn The Shroud'. I'm not sure the songs have been remastered/remixed, but I suppose so. Either way, the songs, as well as the 3 new songs still rock. So enjoy, and again Best Wishes for 2010!

Andromeda - Exalting The Spirits MCD
Posted by XhcnoirX at 5:50 PM

Re-upped! Apologies for the delay.