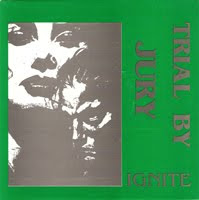 Here is, in my opinion, the best record done by Trial By Jury, a band from Hampton, Virginia, who were around in the 1st half of the '90s. This is their 2nd 7", 'Ignite', which was released on Last Stand Records out of Germany in 1992. Amazing music, great vocals, thoughtful and great lyrics, this 7" was way ahead of its time in my mind. A band like Worlds Collide comes to mind at times, but also Betrayed, whose 7" I posted a while back. The only flaw I can find on this record is that some of the songs seem to have no real ending, it's almost like they're unfinished. Still, I absolutely love this 7".

Here's a short biography taken from their myspace:


Trial By Jury formed around 1990, and shortly therafter recorded our demo featuring 6 songs in 1991. The following spring 4 of the tracks were released on 7" vinyl as "the demo 1991". Shortly after, German based label Last Stand Records, released the "Ignite" 7". In late 1992 Trial By Jury was picked up by Outback Records and over the next year released the "Alter" 7", as well as the first full length album, "Fortune Cookie". Shortly after "Fortune Cookie" was released the band called it quits. During the few years the band was together members came and went, resulting in a progression of styles throughout the duration of the band.

If anybody wants me to post some of their other records, just leave a comment or something. And if anybody has their demo (the actual demo, not the demo 7", which I do have, but contains only half of the tracks from the real demo), please get in touch. I have the demo now, awesome.

BTW, does anybody know if Craig Moore from Trial By Jury is the same guy as the one who played for As It Stands/Mayday? Same area, same period in time and all.

hey man I have a little problem I lost all my music through a HD crash,did you dl my DEATH THREAT rarities comp when I posted it?nobody sems to have it and I am really desperate to find it.

Awesome, I've been looking for some stuff by this band ever since I heard them on the "Eternity" compilation. Can't wait to check this out.

Hey man, do you have the Fortune cookie CD, I've been looking for a link for ages.

File is down (it's been 6 years lol), any chance you can upload it?