A Way Of Life revisited 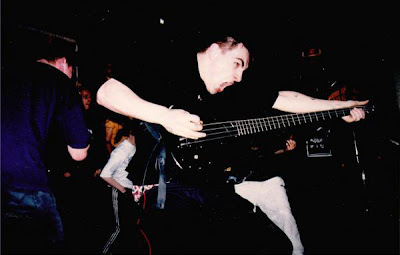 After I posted the AWOL demo someone requested a post of their other records. It's been in the back of my mind for quite some time, and finally I've come around to it. Sorry for the huge delay, what can I say, I'm a lazy piece of shit. I ripped their vinyl output and the tracks from 2 compilations they appeared on. I believe that, together with the demo, this represents a complete discography for this amazing and underrated French band. 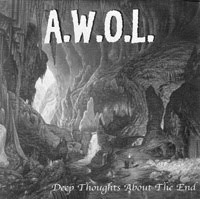 As you will notice if you download this stuff, A Way Of Life (AWOL) changed their style a bit from their demo. They added more metal influences to their style and dropped the mosh parts. While I think their demo is their best stuff, and it is still easily one of my favorite demo's ever, I do love this period of AWOL as well. The 'Deep Thoughts About The End' 7" from 1997 however, released on Braveheart Records, is not their strongest release. It starts off with a re-recording of 'The Last Scream' from the demo, which unfortunately doesn't add much to the demo-version, it even suffers from a somewhat thin production which lacks bass and heaviness. The B side shows a band that is trying to find a new sound. It's more metallic than the demo but it just doesn't sound right, the band seems to have thrown too many ideas into one song and it doesn't come out too well. Easily the worst AWOL track. 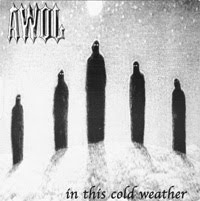 'In This Cold Weather' from the split 7" with Headway, released in 1998 on MoshXBart, shows a huge progression from the 'Deep Thoughts...' 7". Over 7 minutes long, this is a great track that shows AWOL successfully moving into a new direction. An impressive effort. Only 2 months after recording this track they went back into the studio and recorded 3 more tracks, 2 were to appear on the 'The Nightmare Begins... In This Other Land' 2xCD compilation (Overcome Records, 1998) and 1 on the 'KDS Crew: Rise & Fall' compilation (The Age Of Venus, 2001). These 3 tracks are again awesome, especially 'Signs Of The Downfall'. Unfortunately these also happened to be the last official recordings. As I also mentioned when I blogged about the demo, there were plans to release more stuff, but this never happened unfortunately. So enjoy these tracks, and if you haven't done already, also download the demo. I cannot recommend this band enough.

Thanks a lot! Love it!

This is really nice from you, AWOL was an awesome band, and most of their material is really hard to find, thanks a lot !

many thanks for posting this!
next, maybe you can make Underground Society post...another underrated French band.

Anon, I know very little about Underground Society and I don't think I have all their stuff, but I'll see what I can do.

almost as underrated as ananda....but not quite........still really fucking good though.....

Must have some pictures from them at Bissegem, somewhere around 1996/7 I believe. Performing with either Kickback, Trapped In Life or All Out War...

I re-uploaded the discog, you can use the link if you want :

Gio you should scan and put online those pictures !

Also if you want some Underground Society stuff I can provide you with it, great band as well !

Don't have too much Underground Society myself, their 7" & split 7" with Kabal and some comps... WOuld be cool if you could help me, Fred. Email me if you can please.