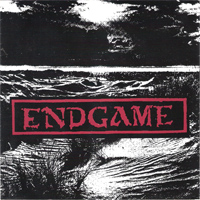 New Start Records was a hardcore punk label from Winston-Salem, North Carolina in the early 90s. They released some interesting records including the Hardball 'One On One' 7" and some Naked Angels 7"s. One band they also released that is way more obscure is Endgame. Their 'Seeds Of Consciousness' 7" was released in 1992. Decent early 90s mid-tempo hardcore that tries to incorporate more rocking influences, with those typical half-spoken/half-sung vocals from that era. Nothing special, but good enough for my ears.

Endgame - Seeds Of Consciousness 7"
Posted by XhcnoirX at 6:26 PM 7 comments: Links to this post