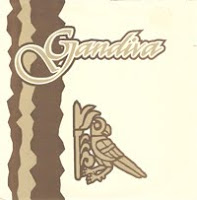 Here's the first release on Devils Head Recordings, the label done by Adam Dutkiewicz of Aftershock (RIP) and Killswitch Engage. This 7" by Gandiva was released in 1997. Gandiva was a pretty short-lived band from East Longmeadow, MA, from what I gathered they started sometime in 1996 and ended in late 1997, after doing only 2 demo's and this 7", besides compilations. I don't have either demo unfortunately, but apparently the 3 songs on this 7" are re-recorded songs off the 2nd demo. Either way, this is a really good & solid 7". Solid '90s metalcore like Aftershock, with the second song being borderline emo-metal like New Day Rising. They also have multiple members doing vocals, sometimes doing their own thing at the same time, which works really well for them.

Judging by the band-name and the thanks-list, the band or some of its members might have been krishna-conscious, but I'm not sure. I couldn't find too much info on this band or this 7" unfortunately. I also have a compilation 7", 'Vibratory Disturbance 2', that they're on with a song that's not on this 7", I might post it at some time in the future. Members went on to bands such as Year Of Our Lord, Barrit, Cave-In and Hallraker. And I'm sorry about the pop in 'Searcher', I couldn't get rid of it. Here is, in my opinion, the best record done by Trial By Jury, a band from Hampton, Virginia, who were around in the 1st half of the '90s. This is their 2nd 7", 'Ignite', which was released on Last Stand Records out of Germany in 1992. Amazing music, great vocals, thoughtful and great lyrics, this 7" was way ahead of its time in my mind. A band like Worlds Collide comes to mind at times, but also Betrayed, whose 7" I posted a while back. The only flaw I can find on this record is that some of the songs seem to have no real ending, it's almost like they're unfinished. Still, I absolutely love this 7".

Here's a short biography taken from their myspace:


Trial By Jury formed around 1990, and shortly therafter recorded our demo featuring 6 songs in 1991. The following spring 4 of the tracks were released on 7" vinyl as "the demo 1991". Shortly after, German based label Last Stand Records, released the "Ignite" 7". In late 1992 Trial By Jury was picked up by Outback Records and over the next year released the "Alter" 7", as well as the first full length album, "Fortune Cookie". Shortly after "Fortune Cookie" was released the band called it quits. During the few years the band was together members came and went, resulting in a progression of styles throughout the duration of the band.

If anybody wants me to post some of their other records, just leave a comment or something. And if anybody has their demo (the actual demo, not the demo 7", which I do have, but contains only half of the tracks from the real demo), please get in touch. I have the demo now, awesome.

BTW, does anybody know if Craig Moore from Trial By Jury is the same guy as the one who played for As It Stands/Mayday? Same area, same period in time and all. 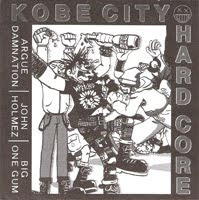 This compilation 7" from 1996 became part of my collection for one reason and one reason only... John Holmez is on it. I don't mean John Holmes the porn actor or the UK hardcore band John Holmes, but the Japanese hardcore band from the mid '90s. Excellent heavy & semi-metallic hardcore, the band helped build a hardcore scene in Japan, enough so that in 2002 or so, a 'Tribute to John Holmez' compilation CD was released with bands such as T.J. Maxx, Strength and Sand covering a song of theirs. I might put some more John Holmez material on here at some point, good stuff for sure. The recording is not that great, and I prefer their later recordings for sure, but still... It's all good.

This 3-band compilation 7" features, as the title suggests, 3 bands from Kobe, Japan. The most well-known band on here tho, is Argue Damnation. Pretty sweet & raging crust-punk/hardcore, this band was a force to be reckoned with from 1994 to 2004. The third band on here, Big One Gum, well... They play pretty straight forward old school hardcore. The band was presumably named after a line of toys sold in Japan at the time, but other than that I know nothing about the band.

The label, MCR, did this 7" as part of a series of compilation 7"s focusing on the punk & hardcore scenes in various Japanese cities. You can see a full list here. I don't have any of the other ones btw, so don't bother asking. The sleeve is a 4-panel fold out poster, with nothing printed on the back side. Since the images on the 4 panels aren't connected, I kept the scans separate as well.

Kobe City Hardcore comp 7"
Posted by XhcnoirX at 8:40 PM No comments: Links to this post 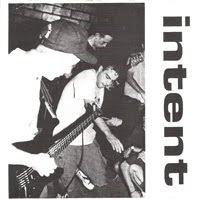 I got this 7" with a bunch of other random records a while ago. I didn't know anything about the band, and I pretty much still don't. Still, a great piece of vinyl. Up-tempo hardcore with some more rocking bits. It reminds me of Billingsgate a lot, and I love Billingsgate. This version was released on Punchline Records in 1990 on beautiful marbled blue vinyl, limited to 500 copies, mine's number 99. However, there's also another pressing, also from 1990, on Redemption Records, not sure what's up with that. I suppose I'll have to find a copy of it to find out. They also appeared on the 'Voice Of Thousands' compilation, and that's about as much as I know of this band. I don't know if they did anything else or what the members did before or after. There's no contact information listed, but this was recorded in Austin, TX so I can only assume this band was from Texas. So if you have any information about this band, leave a comment or something!

For those who are wondering, this is not the Intent from Albany, NY that Nate Wilson (Monster X, Devoid Of Faith, Das Oath, Gloom Records) was in. Same period in time, different bands.

Update: I also have the version on Redemption Records now as well as the 'Drift' 12". Love this band!

Posted by XhcnoirX at 3:38 PM 8 comments: Links to this post 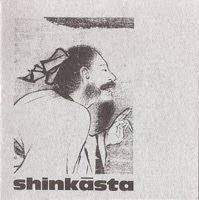 Shinkasta from New Zealand, not to be confused with the shitty Canadian altrock band Shikasta. This band actually ruled. If I remember correctly I received this MCD from one of the members of Shinkasta whom I met on IRC 'back in the day', even wrote a review of it for some webzine I contributed to back then. Haven't seen them mentioned a whole lot since and it's quite a shame, this is a pretty solid record that should appeal to quite some people who visit this blog. Released in 1996 on Barricade Records, also out of New Zealand, this MCD has 5 songs recorded in a studio on it plus 2 live-recordings added to the 5th track. The live-recordings don't really add too much here tho. Either way, good and relatively obscure band and record (esp outside of New Zealand). If yer into heavy mid-tempo & metallic hardcore like Strain, you'll enjoy this. So check it out.

Here's a short bio that my man Ca$hdog in New Zealand wrote up on Shinkasta:

Shinkasta formed in Hamilton, New Zealand in 1992/93 and although they only released this one singular release for those who saw them live they left quite a legacy. Since they stopped playing in 1996 the members have been in various other heavy bands. The singer Bennett went onto sing for Daredevil, the guitarist Stu played guitar for State of Grace, The bass player Mark played bass in Vargas, The Redshift and joined Evil Priest, the drummer Andrew played drums for Vargas.

Shinkasta MCD
Posted by XhcnoirX at 12:05 PM 4 comments: Links to this post