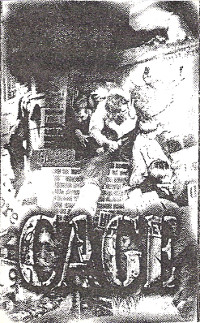 A random demo from a band I know virtually nothing about. Anyways, Cage was from Methuen, Massachusetts (also the town where Cave-In was formed btw) and played a heavy and downtuned hardcore/metal hybrid, similar to bands such as Blood Has Been Shed. Add to that a singer whose vocals alternates between gruff shouts to the type of singing that brings to mind BHBS's Howard Jones (also Driven & Killswitch Engage), and you should know by now whether this might be interesting for you or not. They recorded the 'Earth At 95' demo in 1995, and I think this was their second demo. I don't think they did anything else after this one tho, but if somebody has more information about Cage, please leave a comment!

Band members moved on to bands like Nok, Never Got Caught (which also featured someone from Boston hardcore band Tree) and Gozu.

Manifold - When Silence Erases My Name 7" 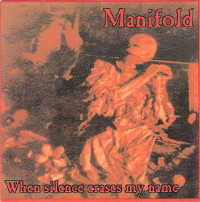 Manifold was a new school hardcore band from the Lazio region in central Italy during the second half of the 90s. Their 'When Silence Erases My Name' 7" was released on Rebound Action in 1997, a label run by their drummer Andrea 'Capò' Corsetti who still runs the label and also still drums, in a brutal grind/hardcore band called Neid...

Anyways, Manifold was a (partly?) vegan sXe band with lyrics about those subjects, and played a heavy style somewhere between more early/mid 90s new school sounding and the more metallic sound of Italian edgemetal bands like Reprisal and Purification. But rougher and less polished, both in execution and production. Good stuff tho, it's a shame they remained fairly obscure, especially outside of Italy... They also did a split 7", but I don't have it unfortunately. Members also played in bands like Muddle and Tear Me Down.

Manifold - When Silence Erases My Name 7"
Posted by XhcnoirX at 5:22 PM No comments: Links to this post