I may be a scrawny 40-something year old 'kid' but I do love tough hardcore from time to time. Here's a relatively new band who are heavy and tough as nails. Penitentiary from the Northwest of Indiana recently dropped their first EP online. Great heavy metallic hardcore that also has some slight thrash metal influences. The band members have been around for years and previously did time in bands like Blood In Blood Out, Imprisoned and Blackwater. I am only familiar with BIBO who were awesome, so it's cool to see some of them still playing hardcore. What sets Penitentiary apart are the thrash metal influences, reminding me of bands like Through The Discipline at times, while their overall sounds also bring to mind bands like All Out War and Anger, and some of the harder PAHC bands. If these guys ever make it out here to Europe, they had better play the Ruhrpott area in Germany, kids there go ape-shit for this stuff.

Posted by XhcnoirX at 1:14 PM No comments: Links to this post

Afterlife is a new female-fronted hardcore band from Saint Petersburg, Russia, who just released their first EP online, and they love their 90s hardcore. Perfect! Their sound incorporates elements from a variety of 90s bands. I hear hints and influences of bands as wide-ranging as Trial, early Undying, Doughnuts and Nientara mixed with some heavier and more modern influences. Thankfully it doesn't come off as a mess, and singer Natasha's vocals are also quite strong. Excellent stuff. Unfortunately my knowledge of the Russian language is pretty much non-existent, but Google Translate suggests the lyrics are more on the personal than political side. In any case, this is an awesome EP, so check it out! I'm looking forward to checking out more material from this band!

Posted by XhcnoirX at 4:36 PM No comments: Links to this post 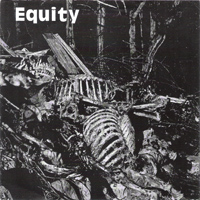 Equity was a band from Roanoke, Virginia that played raw scathing hardcore with raspy vocals, and they managed to blend in both softer parts and heavier parts, creating a really cool sound, somewhat reminiscent of bands like Channel. This self-titled 7" was released on At A Loss Records in late 1995/early 1996, who also released the 'Destroy Southern Tradition' comp 7", the only other record I know of with Equity, aside from possible demo's. In any case, this 7" is really good stuff, with lyrics that deal with subjects like abortion (which seems inspired by a local story of an illegal abortion that went wrong?) and the death penalty. Members moved on to bands like Aphasia, Die Screaming and The Sword. If anybody has any additional info on this band, or even access to other recordings, please leave a comment!