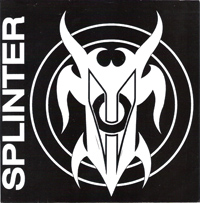 Splinter was a 90s metalcore band from Akron, OH. Unlike the well-known Clevo hardcore scene which spawned a ton of bands including Integrity, Face Value and Ringworm, other areas of Ohio seemed to fly under the radar a bit (maybe because of Cleveland having such a strong scene?). Even tho Akron is close to Cleveland, Splinter never seemed to get the recognition they deserved. They played excellent 90s metalcore that at times goes for an Integrity/Holy Terror style sound but Splinter was far from an Integrity clone. They combined fast metallic hardcore, with hard breaks and tougher mid-tempo parts. For this post I decided to rip all Splinter records I own, which unfortunately is not their demo (I believe they did only 1 demo). 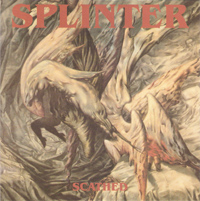 Splinter started out in 1989, but it wasn't until 1992 that their 1st 7" was released. This self-titled 7" was released on Smorgasbord Records, who also released it on cassette tape with 1 additional track. After that they recorded the 'Ten Love Songs' LP in 1993, which was released in 1994 on Desolate Sounds and Tenacity Records. This LP featured a couple of re-recordings of tracks from the self-titled 7"/cassette, as well as a cover of Black Sabbath's 'N.I.B.'. They went into the studio once more, in late 1994, when the band was nearing its end. In 1995, 2 songs from this recording session were released as the 'Scathed' 7" on Stormstrike Records out of Germany. Rubber City Records, out of their hometown of Akron, would release Splinter's 'The End Of The Belief' 7" posthumously in late 1996/early 1997. This 7" featured unreleased songs from the 'Scathed' 7" recording session, including a rather wacky cover of Minor Threat's 'Bottled Violence'.

Splinter also appeared on a couple of compilations including the soundtrack for 1997 horror movie 'Bloodletting', but all these tracks were taken from the 'Ten Love Songs' LP. Their track 'PM 1893 2TL' from the 'Dark Empire Strikes Back' compilation CD is actually 'Three' from the LP, no idea why it ended up with that title on the comp. 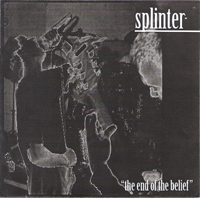 Splinter's line-up would remain intact throughout all these recordings, I don't know if they had line-up changes prior to that however. Splinter singer Larry 'Bleachmouth' Gargus moved on to The Unholy Three which after a few years became Don Austin, another pretty cool band which also included guitarist Clint Bott, who ran Rubber City Records. Drummer Joe 'Knuckles' Macchiarole would also move on to Don Austin, however he would quickly be replaced, before any recordings were made if I'm correct. I don't know what the other band-members ended up doing after Splinter folded.

My scanner is no good for scanning LP's so the LP zip contains no scans, sorry about that. You can see scans on its Discogs page however. For some reason this was also the hardest record of the bunch to obtain, it took me years to find (and then I got it from someone I know right here in the Netherlands, go figure!), I only had it in digital for for a long time. Anyways, enjoy! And if somebody has the Splinter demo, please share, I would love to hear it!

Update June 1st 2014: Larry Gargus emailed me after reading this post. Here's some more info straight from him:


Just so you know - there was one more compilation that we appeared on. It was called "Fast Kids Go!" and came out between the release of our 1st 7" and the LP. It contained an early version of "Years from Day One".

The reason the song titles are different for the track that was on the "Dark Empire" CD and the LP is kind of complicated. We weren't sure that we wanted to do the comp because we were strictly an Akron band. Up to that point we were shunned by the Clevo crowd and we had decided that we didn't need Cleveland anyway. But, Dwid asked us to be on the compilation and we had put out the LP and needed all of the exposure we could get so we did it. But, Dwid said he couldn't find the title on the DAT I sent him so he put the serial code from the tape as the title instead of calling me to ask. The story that got back to me was that he didn't like the song, our band or the song title. I have yet to figure out why he asked us at all.

We never had a line-up change during the band's existence. It was the four of us from beginning to end. Nathan moved to Colorado to snowboard. Bob lives in Columbus Ohio, where he own/operates a gourmet pizza place called Yellowbrick. Joe and I still live in Akron and see each other on a regular basis. Joe did appear on the 1st Don Austin 7", but bowed out on his own since he wasn't interested in doing a band on a regular basis.

Thanks again. None of us ever stopped playing music but it is weird to think that Splinter would be remembered by anyone outside Akron. Most people here don't even know about that band... Joe, Nathan and I were 17 and Bob was 15 when we started that band, so it was a long time ago. It makes us old men feel good that you enjoy it.

Splinter are so sick! My friend first played them to me at his house and was stoked on the fact the LP was called Ten Love Songs but the music was so heavy. Great post man.

Excellent post. A friend turned me onto these guys in the early 90s through their first 7". I bought Ten Love Songs not soon after. Such an obscure and very underrated band. I've been searching for a digitized copy of the first 7" for awhile now. Great to finally hear it again. And can't wait to hear the other stuff. Cheers.

Having problems with last 2 songs on the End of Belief 7". They cut off. Please let me know if this is on my end.

You are right, no idea what happened. Anyways, my original files were fine, so I created a new download, and I checked, they play corectly now. Please download again. Thank you for bringing it to my attention!

been looking for this stuff for a long time thanks!

Any chance for complete reup, please?

Awesome, you're the man!! ThanXXX

Any chance for complete reup, please? Thanks!

Any chance for a re-up, please?
Thanks in advance.

hello can you re up the links?

The links all work for me... Can you try again please?