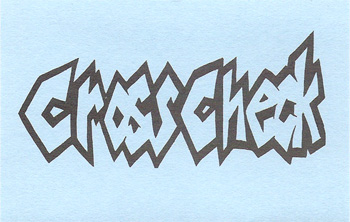 Almost 2 years ago I posted the Crosscheck 7", which as it turned out had Brian Peterson on bass, the author of the awesome Burning Fight book. A while ago I got my hands on Crosscheck's 'First Offense' demo, from 1995 just like the 7". Like the 7" it's mostly mid-tempo hardcore with good lyrics. I prefer the 7" as a whole, but if you enjoy the 7" you will also enjoy this demo. A solid demo by a solid, and underrated, band. Enjoy! 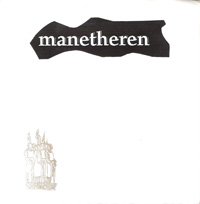 Not too long ago a flyer popped up online of an upcoming 2-day Conquer The World fest, with 2 amazing line-ups. Had it been real, I would've considered flying over to attend both days. Chokehold, Morning Again, Culture, Empathy and Thoughts Of Ionesco among others. However, it was fake, as expected, heh... Anyways, Mike Warden, who ran Conquer The World records, has had a pretty sketchy reputation for many years now. Whether that reputation is deserved or not, he did release some classic bands/records, there's no deying it. One record which he also released and which not too many people seem to be aware of tho, is the self-titled Manetheren 7", which was released in 1997. Named after a city from the 'Wheel Of Time' fantasy book series by Robert Jordan, Manetheren was more or less Mike Warden on vocals and guitar and as the insert explains it was mostly a project for him to put some of his own music and words/feelings to vinyl. He asked some people to help him out with recording this 7". They were bass-player Nathan Miller who was playing in Thoughts Of Ionesco at the time and had previously played in Empathy, second guitar player Mike Derrick who was also from Empathy, and drummer Cliff Magreta from Ambassador 990. Both Empathy and Thoughts Of Ionesco also had releases on Conquer The World btw. Anyways, this 7" would be the only recording this 'band' ever did, and I have to say, it's a pretty good effort, both musically and lyrically. Give it a try.

Brother's Keeper - Because We Care... tape

Brother's Keeper from Eria, PA was a band that people seemed to either love or hate, primarily due to singer Mike Ski's high-pitched vocals. Personally, I loved and still love BK, great band, both live and on record. Bass-player EMS, who also does Surprise Attack Records and the awesome, but now dead, Coregasm blog and now plays in a band I recommend checking out if you haven't already called Smoke & Mirrors, posted the Brother's Keeper discography a few years ago here. It was hosted on the now defunct Megaupload, so the download links don't work anymore. But here's a cassette tape that wasn't included in that discography... This was a tape that was released as a benefit for an Erie, PA based animal help group called 'Because We Care'. The Surprise Attack Records discography page states there were 500 of these, all hand-numbered, with additional inserts and all. My copy however doesn't have either and the leaflet's also different from the picture on that page. It is a pro-printed tape tho and the leaflet's printed, not photocopied or anything, so I have no idea what's up with that. Possibly a second run to raise some more money for Because We Care? Either way, this tape has a 4-song live recording, recorded at the Pickle Patch in Goleta, CA on July 7, 1998, when BK were touring with Boy Sets Fire. Not the best quality sound-wise, but great stuff nonetheless as far as I'm concerned. I ripped each side of the tape as 1 MP3, so there's 2 songs per MP3. Unfortunately the tape cuts off right near the end of 'The Continuum', nothing I can do about that. But still... enjoy!!

Brother's Keeper - Because We Care... tape
Posted by XhcnoirX at 3:08 PM No comments: Links to this post